After spending 15 years working as an interior designer in New York City, David Slivinski needed a change. Having recently lost his mother, he was ready for a fresh start in a new city. He chose Phoenix for its warm weather and active lifestyle and was thrilled to join California Closets as a design consultant, the perfect role for him given his interior design background and genuine desire to help others. 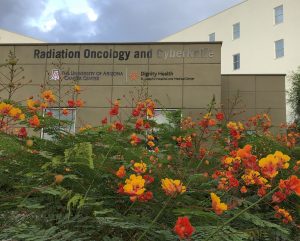 David has been receiving treatment by a team of world-class doctors at Barrow Neurological Institute in Phoenix, AZ

In July he purchased a home, deepening his ties to his new community. When he chose his home, its proximity to the world-renowned Barrow Neurological Institute wasn’t a consideration. And he had no way of knowing how significant this location would soon become for him.

David turned 40 at the end of July and celebrated the milestone birthday during a trip to see friends in Seattle. He had just enjoyed a birthday dinner when suddenly he became violently ill and began having seizures.

Forty eight hours later he awoke in a hospital to stunning news – doctors suspected he had a brain tumor. A biopsy soon confirmed the diagnosis and his medical team began to discuss treatment options with him.

David’s tumor is called an Oligodendroglioma, and it occupies three sections of his brain. Due to its large size, surgery is not an option. Instead, doctors prescribed an aggressive course of radiation and chemotherapy in an effort to keep the tumor from growing.

David began his treatment at Barrow — less than a mile from his home. Because of his recent history of seizures, he is no longer able to drive so he often walks to the hospital for treatment – to the amazement of medical staff. David believes keeping fit and strong – physically and mentally – will be key to his ability to fight this disease. In addition to the radiation and chemotherapy treatments he’s receiving, David incorporates yoga, acupuncture and follows a nutrient-rich diet comprised of foods widely believed to fight cancer. 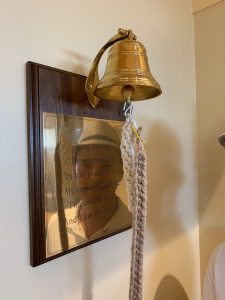 To commemorate their last day of radiation treatment, patients at Barrow ring the bell three times

He recently received some incredible news, the tumor had shrunk! This is a development even his doctors deemed highly unlikely. In fact, in their eyes, simply stopping the growth of the tumor would be a victory, so this discovery was something to celebrate.

No day but today

Throughout his journey, David has maintained a positive and spiritual outlook, “If we are going through something in life, it’s because we are strong enough to get through it. We become better people through the events that shape our lives.” His mantra is “No Day But Today,” which fans of the musical Rent will recognize, and which is a reminder that every day is a precious gift.

Doctors will continue to closely monitor his tumor, and David hopes to be cleared to begin driving again, so he can return to the job he loves so much.

FirstService Relief Fund helps our people when they need it most

David has shared his story with us in the hopes it will inspire colleagues to learn more about the FirstService Relief Fund. No one ever expects to face a catastrophic health issue, and certainly not at such a young age, but David’s story is a sobering reminder that unforeseen events can happen to any of us at any time. That’s why FirstService established the Relief Fund, to help our people when they need it most.

The grant David received from the Relief Fund was badly needed to help pay medical bills, and in his words, was necessary for survival.

“My cancer has been a blessing that has defined my life in a positive way. It has allowed me to see the depth of the human heart and the love people have even for complete strangers,” says David. “I am very, very grateful for the support of my colleagues at California Closets, and to all who have donated to the FirstService Relief Fund. Your support has made a huge difference for me, and I cannot thank you enough.”

To learn more about the FirstService Relief Fund, please visit firstservicerelief.com. 100% of money donated goes directly to help our people in need. We hope you consider setting up a recurring payroll donation. Even just $1 per pay period can make a difference.

David’s colleagues in Phoenix are joining together for the Phoenix Brain Tumor Walk on December 7, 2019. If you are in the Phoenix area and are interested in joining the California Closets Phoenix team in this wonderful event, or if you would like to support this worthy cause, please click here.

Read about David’s inspirational journey on his blog, www.davidslivinski.com.